Due to the high demand for appointments, we can unfortunately only offer you appointments with an expected lead time of approx. 8-12 weeks.

To make an appointment →

To make an appointment→

Call us now to schedule your OSAS consultation and root cause evaluation today.

You read correctly: sleep apnea can be stopped. A specially developed jaw surgery not only provides relief, but also brings about a complete cure. If you too have had enough of the annoying CPAP mask or can't even tolerate it in the first place, find out from us about the only causal therapy method for obstructive sleep apnea.

We are Germany's leading clinic for the elimination of the causes of obstructive sleep apnea. For 15 years now, we have been dedicated to early detection and curative treatment.

The many positive reports from our patients confirm this: The procedure significantly improves the quality of life. Not only will you sleep through the night relaxed and without breathing pauses, but you will also stop snoring. The treatment has many advantages.

The causal therapy - the only successful curative treatment:

Would you like to learn more about us and causal therapy? Then contact us here and make a non-binding consultation appointment.
Request a free initial consultation!

What do our already cured patients report?

What is sleep apnea?

Sleep apnea is a sleep-related breathing disorder in which breathing stops recurrently during sleep. These interruptions usually last between ten seconds and two minutes and occur more than five times per hour. As a result, the oxygen content of the blood decreases, while the carbon dioxide content increases. This triggers an alarm reaction in the body. To avoid a further drop in oxygen, the body makes wake-up attempts.

Thus, sufferers are regularly disturbed by the breathing pauses and the alarm reactions they cause during sleep. The night's rest no longer serves its purpose and cannot provide the body with the rest it needs. The consequences are permanent fatigue, microsleep, difficulty concentrating, mild mood swings up to severe depression and more. Untreated sleep apnea can quickly become life-threatening and trigger high blood pressure, strokes or heart attacks.

You can read more about the breathing disorder, life-changing surgery and associated treatment costs in our blog section or learn more directly during a personal consultation.

What causes the symptoms of sleep apnea?

The brief cessations of breathing, also known as apneas in technical terminology, lead to repeated awakening reactions in the body. Due to the apneas, the oxygen content decreases while the carbon dioxide content of the blood increases. This triggers an alarm response from the body to prevent a further drop in oxygen levels. Thus, sufferers are regularly disturbed in their sleep by the lack of oxygen and the wake-up reactions it causes. Nighttime sleep thus hardly fulfills its function of providing the body with rest.

Breathing stops at least 10 times per hour for more than 10 seconds in OSAS. A characteristic feature of sleep apnea is that sufferers usually do not wake up consciously. Only the pulse rate is increased, along with other bodily functions. This makes it particularly difficult for sufferers to identify sleep apnea as the cause of their pronounced daytime sleepiness. Many people thus suffer from the symptoms over a long period of time, although a lack of restful sleep can significantly reduce the quality of life of those affected. Thus, not only daytime sleepiness and microsleep, but also depression and cardiovascular disease can result from sleep apnea. The sleep apnea syndrome is treatable. Get a first impression of what is medically possible and how we have already helped many sufferers by reading helpful patient testimonials. For more information about our clinic, visit the About Us section.

What are the different forms of sleep apnea?

There are three forms of sleep apnea. The most common form is the so-called obstructive sleep apnea syndrome. In Germany alone, this affects one to two percent of women and two to four percent of men in middle age.

The three different types of the disease:

If both syndromes occur together in combination, it is called mixed sleep apnea.

The mixed form can be treated with jaw surgery.

Obstructive sleep apnea is always anatomical and caused by too narrow airways. Causes include, for example, a reclined jaw, slackening of the muscles and soft tissues in the throat, or enlargement of the tonsils. In combination, this can lead to a complete closure of the airways during sleep and thus to breathing pauses.

OSAS can be cured by causal therapy.

The second, far less common form is so-called central sleep apnea. ZSAS is caused by a malfunction of the central nervous system. The brain literally forgets to breathe. This leads to respiratory arrest, even though the airways are open.

ZSAS cannot be treated with surgery. 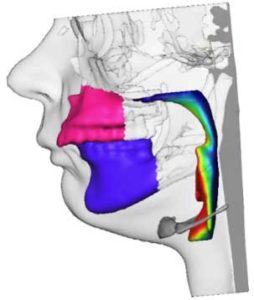 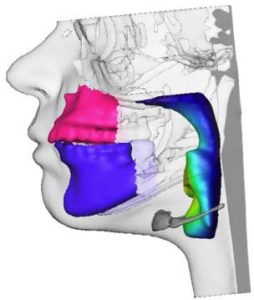 Dr. Robert Frey has made it his mission to identify the causes of obstructive sleep apnea and to eliminate them permanently by surgery. Dr. Frey has been involved in the surgical treatment of OSAS for more than 15 years. His scientific research areas are interdisciplinary throughout.

Am I eligible for the jaw surgery?

Both the obstructive and mixed forms can be successfully treated by causal therapy. If you would like to check whether surgery is suitable for you, we will be happy to provide you with a detailed, non-binding consultation. In order to prepare your consultation in the best possible way, please fill out our questionnaire first. After evaluation, we will contact you as soon as possible with a consultation appointment.

If you do not yet know whether you merely snore loudly or actually suffer from dangerous sleep apnea, take the self-test here and have a positive suspicion additionally clarified by a specialist.

If this also confirms your initial suspicion and you do not want to just accept the diagnosis, contact us for your possibility of a cure.

What are the consequences of sleep apnea?

Many sufferers are unable to sleep through the night. This is because the body regularly wakes up at night to get oxygen.

Increased urination, also called nocturia, is considered a leading symptom of OSAS. It is not an inevitable symptom of old age.

The body of those affected is supplied with too little oxygen, which reduces the blood supply to the heart. The result is an often fatal heart attack.

The main symptom of OSAS is severe daytime sleepiness. The chronic sleep deficit is the main culprit. The body cannot recover sufficiently during the night.

Non-restorative sleep leads to poor monotony resistance. Microsleep can be the result. This is particularly problematic when driving, for example.

Loud snoring also makes for a very restless night for the partner. Quiet and regular snoring, on the other hand, is usually harmless.

The brain of those affected is very poorly supplied with oxygen by the disease. In conjunction with constant fatigue, the risk of depression is very high.

The heart is greatly affected by the body's constant stress response and non-restorative sleep. High blood pressure can trigger other very serious diseases.

Reduced oxygen supply to the body causes headaches in patients. Tension at night associated with the breathing stops, among other things, provide a pseudo-migraine / CMD complaints.

Strokes are often the result of elevated blood pressure. Strokes also usually occur at night or in the early morning.

Caused by hypoxia, erectile dysfunction (impotence) is a symptom of untreated OSAS.

The bimaxillary advancement with CounterClockwise rotation eliminates the causes of obstructive sleep apnea. With the cure of sleep apnea, you will be able to sleep relaxed through the night again and all symptoms such as headaches, fatigue or even increased urination will greatly diminish or disappear completely. Furthermore, the cure of sleep apnea ensures that the probability of suffering a stroke or even heart attack decreases significantly. The risk of depression is also greatly reduced.